The figure below represents the Excel report for an individual. The empty location represents the origin of a metaphorical flashlight which sends out a signal to the other locations. If the connection value is below normal (.50 standard deviations-SD) a blue color is filled for that circle. A darker blue is assigned to those values which are greater than 1.5 standard deviation below normative value. If the value is above the normative value, the color orange is employed.  A darker orange color is employed for those values which are greater than 1.5 SD above the norm. The numbers in the circles represent the standard deviation value for the individual. The first row of head figures present the coherence and phase alpha relations during an auditory memory task. 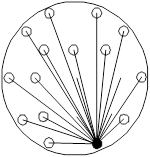