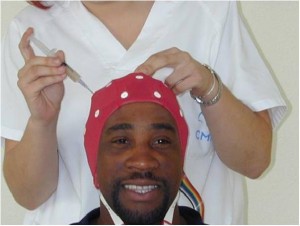 Operant conditioning (also, “instrumental conditioning”) is a learning process during which spontaneous behavior receives a reward or inhibit response. Through operant conditioning, an association is made between a behavior and a consequence for that behavior. For example, when a lab rat presses a blue button, he receives a food pellet as a reward, but when he presses the red button he receives a mild electric shock. As a result, he learns to press the blue button but avoid the red button. A human example would be that we go to work every day and we get rewarded (paid).

The EEG biofeedback situation is one of operant conditioning. The brain is swirling in constant activity with its 100 billion neurons. When the brain spontaneously behaves in the manner that we want, a reward is provided (sound and / or images). When the brain spontaneously behaves in a manner that we do not want, a negative tone or image is provided by the software. This is the basic principle in EEG biofeedback.