There are two basic concepts that are employed in the analysis of the qEEG data – arousal and communication. The first (arousal) refers to the type and level of activity that is occurring at a location in terms of the 5 frequencies. Each frequency can be analyzed according to concepts such as microvolt, relative power, peak frequency and peak amplitude. In general, the important variables for cognitive success are the microvolt and relative power measures. Higher cortical arousal generally means increasing values of the beta frequencies and decreasing values of the delta and theta variables. Within a specific frequency, however, a higher arousal value of that frequency can be reflected in higher values of peak frequency, peak amplitudes, microvolts and relative power values. The delta and theta frequencies are generally negatively related to cognitive abilities and the beta variables are positively related.

The second important concept concerns how the different locations communicate with each other. This concept employs the variables of coherence and phase to express communication variations within a frequency. These variables are particular important for cognitive success in adults. The following figure visually present these concepts. There are 3 wave forms presented in the figure, A, B & C. When the wave forms at A and B are matched in amplitude (height) across the epoch (one second in this case), the relationship is said to have a high coherence value. When there is a short period between the matching wave forms (B & C), represented in the D line, the phase value is considered high. A high value reflects that the information is being transferred quickly, while a longer D line would represent a longer delay in the signal going from point B to C. These two communication concepts represent how information is transferred across the brain from an electrophysiological point of view. 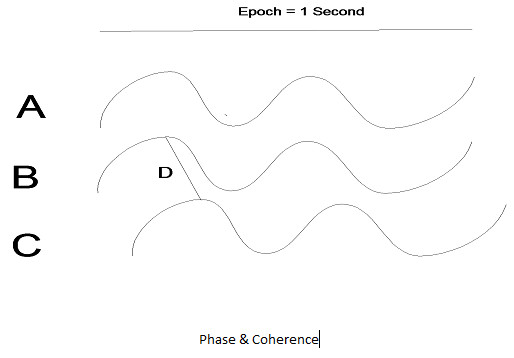 The phase and coherence math formulas (algorithms) are different across different software applications. The formulas employed in Dr. Thornton’s research use the ones developed by Lexicor Medical Technologies. These algorithms are the only ones which have been empirically studied as to their relations to cognitive performance during cognitive activation tasks. Although there are probably statistical relations between these formulas and others employed in different software, it cannot be assumed that theta coherence, for example, in a different software application will have the same relation to performance that the Lexicor formulas do. Until the relation between a specific algorithm and performance has been established, it is important to employ what has been empirically established. It is incorrect for a practitioner to inform you that they are all the same.